Every three years, since the 1970s, an international convention of iron collectors has taken place. These gatherings are highly anticipated and offer the unique opportunity to meet collectors from around the world and to visit some extraordinary collections. 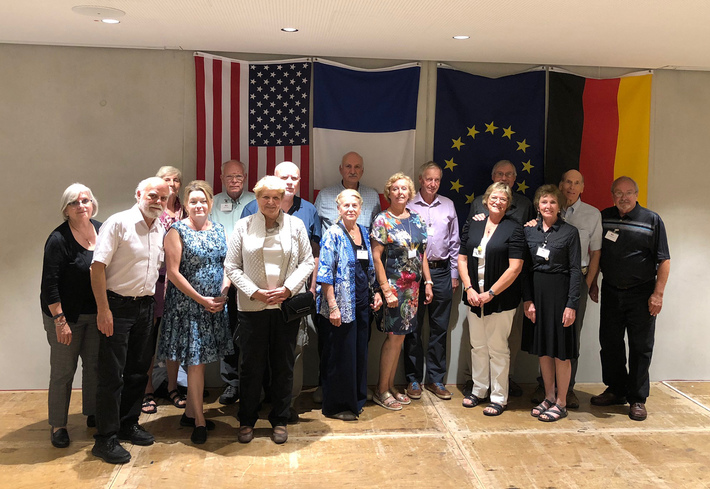 Above: This delegation of PITCA members attended the 2018 International Congress in Germany. Article and Images in the German newspaper Schwabische

The following is an article that appeared in the German newspaper Schwabische on 9/11/18. It discusses the recent International Congress of Iron Collectors held in Lindau, Germany. Article below has been translated from German to English.

Iron-lovers from all over the world met in Lindau The majority of Germans have a clear aversion to ironing. This was the result of a survey by a Berlin market research institute in 2016. But as great as the aversion to the activity is, so great may be the love for the ironing machine itself. Proof of this was provided by the 16th International Ironing Equipment Collectors Meeting in the Inselhalle.

In most households there is a maximum of an iron, Erhard Liegmann from Neubiberg near Munich has a thousand and a half. The 89-year-old has been collecting irons from around the world for about 30 years. He has pieces from Japan and China, from America and Europe, which he keeps in his house and adjoining farmhouse parlor. Liegmann discovered his collector's passion for historical iron when he was given a "slide" by his mother-in-law after the war, an old flat iron. He used that to support his books.

"I have never ironed in my life."

Whether he iron himself? "What? No, "says Liegmann laughing," I have never ironed in my life. "He is fascinated by the technology alone. At an antique market in Rome, which he visited together with his wife, he bought his first own antique irons and so began the collecting pleasure.

Lovers from all over the world

Liegmann is not alone with that. Around 120 participants - most of whom are pensioners - visited the International Ironing Equipment Collectors' Meeting in the Inselhalle last weekend. They came from New Zealand, the US, France, Russia or Spain to exchange ideas or listen to lectures such as "17th and 18th Century European Bolzene Iron" or "Glass and Ceramic Ironing Tools". Every three years, such an international meeting takes place.

"It's about meeting and exchanging ideas, talking about your favorite pieces," says Ilona Krambrock from Vogt, who is the organizer this year and owns 1500 irons, but just as Liegmann himself never ironed. For Lindau as a venue, she had already endeavored three years ago. "The ambience of the old town goes well with the old iron," she says.

"We have a lot of equipment here," she says proudly, pointing to the exhibition tables. Sorted by country, irons from all over the world line up along the wall. There is, for example, an iron from Myanmar, which is filled with hot sand or one from Egypt, which is pushed over the laundry with his foot. 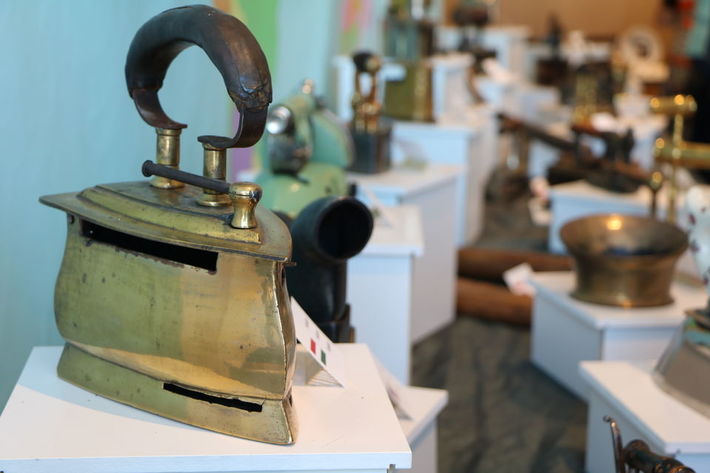 But there are not only irons, but everything that in the broadest sense with "smoothing" has to do, including hair straighteners for hair, snack boards, glove tensioners and playing card presses.

Some of the pieces are only for watching, others for sale. But one searches in vain: plastic. "Today is all plastic and for disposal," says Krambrock. But a hand-forged Biedermeier iron with engraving, that's something special.

Between the exhibition tables, Jeannie Marcus wanders around - proud owner of 3500 iron. She's from New York and came to Lindau with her local iron collector's club. It is the seventh international meeting she is attending. "It's not just about irons," she says. "It's about the entire history of the Industrial Revolution." Especially the European irons would fascinate them because they are very artistic. "They are so beautiful," she says. "In the US, irons are more mechanical." At the gathering meeting, she especially enjoys international exchange. Proper friendships were created here. It is quite logical for Jeannie Marcus that retirees are there: "They have the time and the money," she says with a grin.

Cinto Baggi from Switzerland has also come because of the camaraderie. "You make new friends every time," he says. Baggi has been a collector for decades. He owns 500 irons and says, "Once you're in the collection, you're in it."