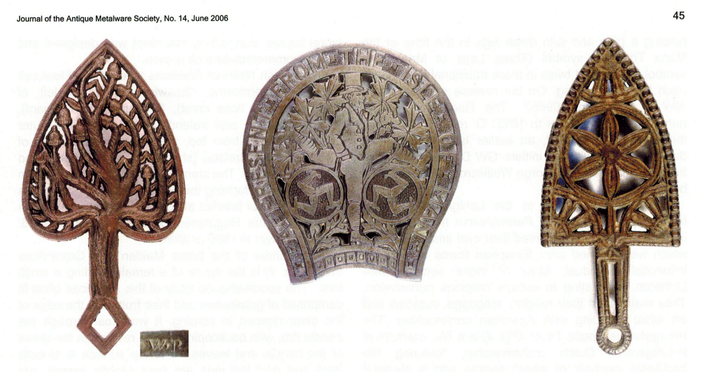 "Trivets and stands have many appealing attributes. Their variety of form and the robustbess of their metal make them ideal collectibles."

By definition, the prefix “tri” denotes three; so you’d think a trivet would only have three supports. Wrong! Although most had three, others were designed with four, five, or six supports. In my books I define supports of less than one inch as “feet” and those equal to or greater than one inch as “legs”.

Trivets were originally used at the hearth; later on the cast iron stovetop and then as table protectors, tea pot stands or plant rests. They are sometimes referred to as “stands”, although that term is more commonly used to describe trivets used as pressing iron (sad iron) rests.

The prefix "sad" in sad iron refers to the fact that the metal of the iron itself was heavy and solid. Sad irons came in many shapes and sizes, from small toy irons weighing mere ounces to the largest tailor's irons weighing up to sixty pounds! Some sad iron stands mirrored the shape of an iron, while others were square, round, or oval.

Sad iron stands were manufactured both with and without handles. They often featured commercial advertising and were sometimes sold in a set with companion sad irons. Most were made of cast iron, with an occasional brass, bronze, or aluminum stand to be found. Nickel plating was popular, as it resisted rust; but few of those stands exist now in their original, fully plated condition. Stands made in the British Isles may have a Registered Design number on the reverse (see below).

The electric iron appeared in the late 1910s, and completely dominated the ironing market by 1930. Once electric irons were manufactured with an inset heel rest that enabled them to sit upright, a sad iron stand or trivet was no longer strictly necessary.

Casting Marks identify the point or points through which molten metal entered the mold. Get in the habit of examining each new trivet to determine how it was cast. Sprue and Wedge Marks are evidence of earlier casting methods.

A Gate-Mark (above) will appear along an edge of the trivet, and it’s not unusual to see more than one Gate-Mark on a casting. A trivet with a prominent, un-filed Gate Mark signifies the earliest casting of this type, from around 1865 to 1900. Irregular grinding marks would also indicate a casting before 1900, since the grinding would have been performed with a hand file. After 1900, machine grinding removed most casting marks. A trivet with a round Sprue-Mark (above) most probably predates 1865. The circular scar usually measures 5/16" to 1/2" in diameter and is found on the reverse of the trivet or stand. It is usually found near the center on the reverse. Think of this mark as a belly button; it’s a scar, evidence of its creation. Some sprue marks appear as shallow, smooth depressions, while others may be elevated above the surface and feel rough to touch.

A rectangular Wedge-Mark (above) is another early casting mark, probably predating 1865. A Wedge-Mark is usually about 1/8" in width; the length can be anywhere from 3/4" or more. It is also usually found on the reverse of the trivet, again usually near the center of the design. This casting mark will be elevated above the surface of the trivet reverse.

Trivets from the UK Trivets from the United Kingdom are interesting to collect. The designs of those that bear an Rd Number (above) or Rd Diamond (below) can be dated using this information. The Diamond, or Lozenge, is the oldest identifying mark (pre 1883). Since 1883 this system was replaced with the Rd Number System. 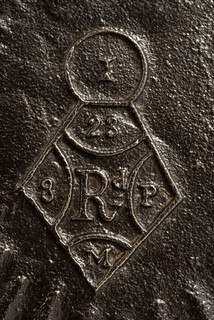 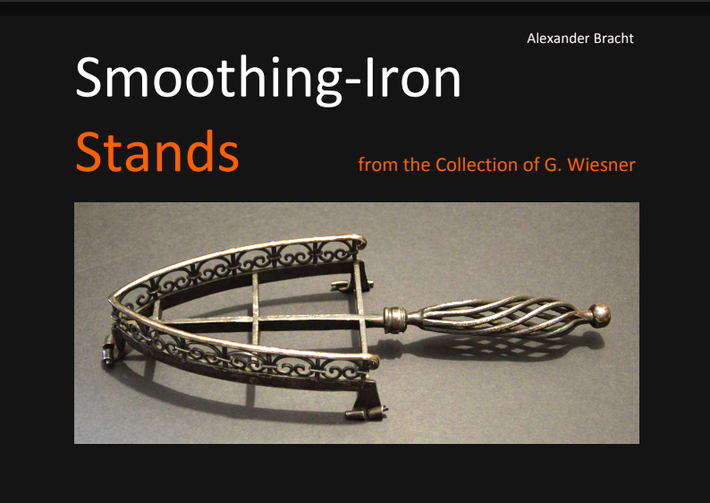 ☆ A Benefit of PITCA Membership: Alexander Bracht has provided PITCA with his research article Smoothing Iron Stands from the Collection of G. Weisner.  Featuring over 90 beautiful color images, it's available to PITCA members in the Members Only/Bonus Materials section.