✽ Be sure to review the complete Index of Videos in the Kevin Talks Irons series for additional information.

"The charcoal iron is a self-heating device similar to a miniature cooking stove. Charcoal from wood or wood coals was normally used for fuel. Heating control was provided by vents which controlled the air/oxygen supply." Irons By Irons (1994), p.33. An easy way to tell the difference between a charcoal iron versus a slug/box iron is by the presence or absence of air venting. Burning charcoal needs air to fuel the fire, so vents (or a chimney) are necessary in a charcoal iron. A slug iron outer casing is solid to retain the heat of the hot metal slug.

"Dating back to the turn of the century, the use of electricity revolutionized the method of heating irons. For the first time, the danger associated with burning coal, wood or petroleum fluids was eliminated." Irons By Irons (1994), p.124. Metal shortages during World War II spurred innovative designs using alternative materials. Corning Glass Works designed the Silver Streak iron in 1942-43 but didn't manufacture it until 1946, after the war ended. They were produced for one year only in  jewel tones of red, blue, green, amber, silver and gold with a clear Pyrex borosilicate shell.

"Flat irons or sad irons include all those irons that are used solely for smoothing and are constructed of cast or wrought iron. Included in this category are those irons which were designed to have cooler or cold handles - ie., detachable wood handles, handles with holes, handles with insulation, and heat shields or other unique designs which can keep the iron handle cooler than the iron base." Irons By Irons (1994), p.95. A set of Mrs. Potts Enterprise Sad Irons, in the original wooden box: three bases, a detachable handle, and a trivet. Sold by Hartzell's Auction Gallery at the Balestri Auction on 7/12/18. 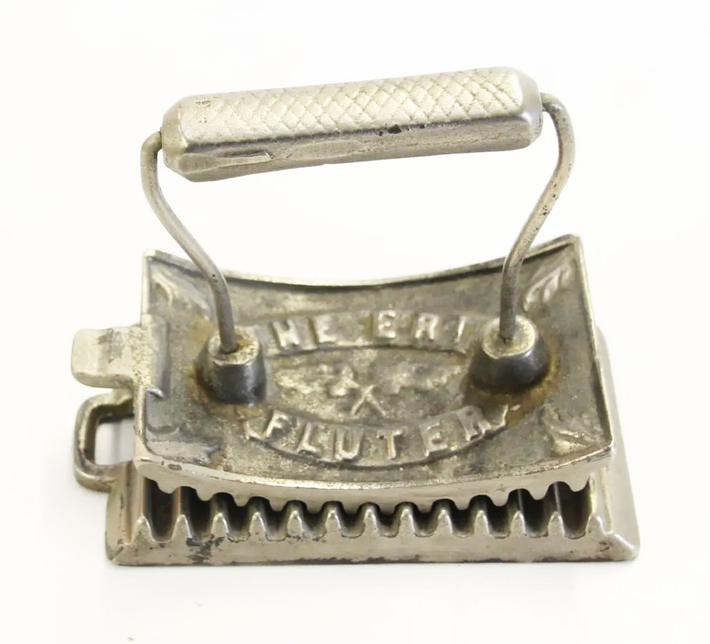 Below: Manville Fluting Machine, 10" tall with two 5" brass rollers. Original paint, signed MANVILLE, PATENT FEB 23 1869 on the brass knob. Both sold by Hartzell's Auction Gallery at the Balestri Auction on 7/12/18 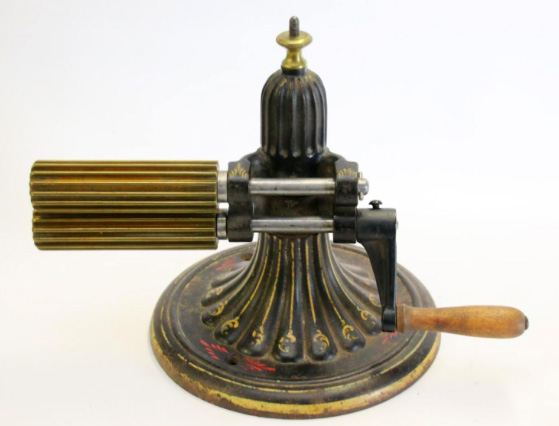 "Irons that are heated by natural gas, denatured alcohol, kerosene and gasoline are categorized as liquid fuel irons. The irons that were heated with these fuels could readily be ignited and the heat could be controlled. Since little or no smoke and soot was produced, liquid fuel irons represented a major improvement over charcoal irons." Irons By Irons (1994), p.108. 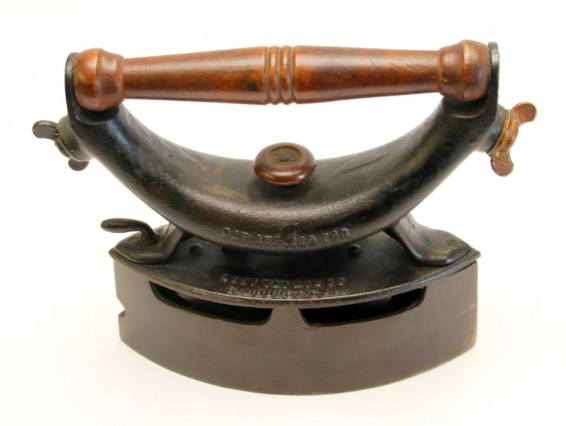 Extremely rare "BEST YET" fuel iron by the Best Yet Mfg. Company of Elmhurst, CA, circa 1909. Unusual curved tank under handle. 9" x 7". Sold by Hartzell's Auction Gallery at the Balestri Auction on 7/12/18.

Goffering irons were used "for ruffling, frilling and pleating fabrics as early as the 12th century in France. In use, the poker/slug provided heat to the barrel which varied in size depending on the size of the ruff desired. Ruffs were made by placing the dampened fabric on the heated barrel and then repeating the process to produce a pattern of ruffs. The use of goffering irons was mainly confined to England and the European countries." Irons By Irons (1994), p.45. 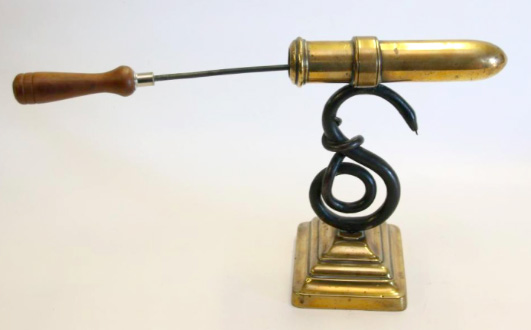 Goffering iron measuring 7" x 8 1'4", featuring a coiled snake of cast iron. Barrel and pedestal are brass. Very rare and detailed. Sold by Hartzell's Auction Gallery at the Balestri Auction on 7/12/18.

Patent Models are very collectible and rare. To learn more about the history of Patent Models in the United States, see the following article by Donald W. Hogan. Unwanted Treasures of the Patent Office. American Heritage Magazine, Volume 9, Issue 2, February 1958. 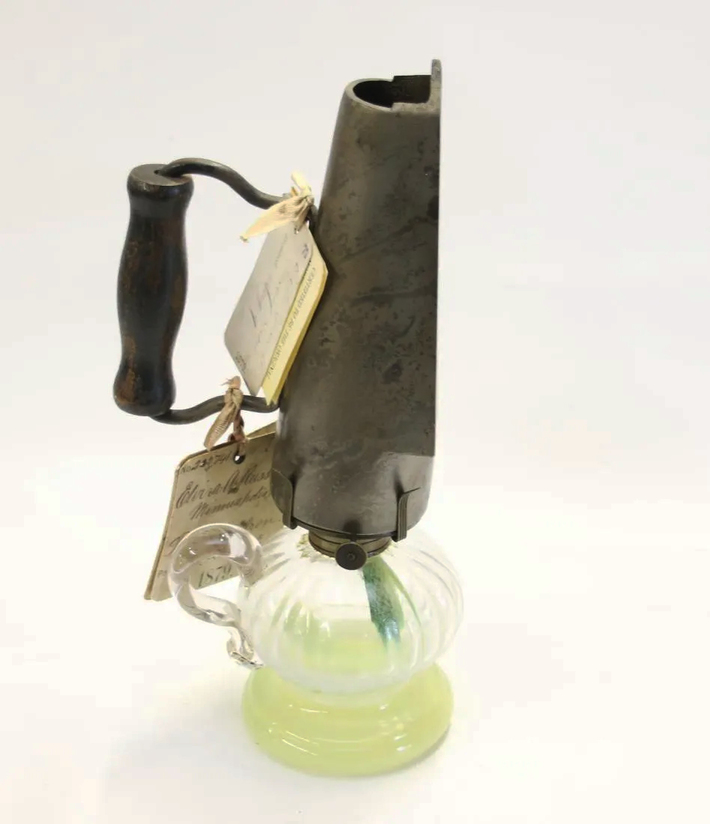 12" tall hollow pressing iron that used the flame of a kerosene lamp for heat. Patent Model # 222741 by Elirra A. Russell, Minneapolis, December 16, 1879. With Patent Tags and faded red ribbon. Other tag says Certified to be Original from the O. Rundle Gilbert Collection, bought at the Walker Auction in 2004. Very rare. Sold by Hartzell's Auction Gallery at the Balestri Auction on 7/12/18.

"The name slug iron or box iron applies to those irons that are heated by inserting a hot slug of metal into the iron cavity or box. The slug heating technique kept the bottom of the ironing area free of ashes and soot which resulted in an improved ironing practice." More Irons By Irons, p.22. "This category of irons shows much variety and novelty of design and can provide the collector with many possible subjects for collecting." Irons By Irons (1994), p.71. 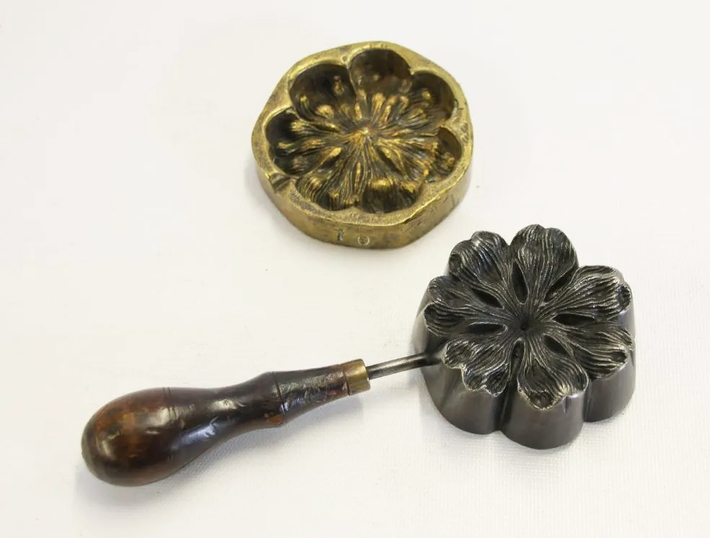 3" Antique Flower Iron with wood handle and brass base. Length (with handle) = 8". Sold by Hartzell's Auction Gallery at the Balestri Auction on 7/12/18.

"Irons that are about 5" or smaller are considered small irons. Many of these irons were not made solely for children, but others were made as toys. As with the regular sized irons, look for the more decorative and those with makers marks and patent dates. Original paint enhances the desirability and value." Irons By Irons (1994), p.129. Amozoc or God-child irons are believed to be the creations of metal-smithers who lived in a small village called Amozoc in the central Mexican state of Puebla.As the story goes, when one of these artisans wanted to honor a female child, such as one of their godchildren, they took up a scrap bit of blue steel, and sometimes a bit of silver, and fashioned a miniature iron for her. They also offered hand-crafted irons to tourists who came through this area by train. From the collection of PITCA member Melissa Blankenship. Charcoal Iron made of cast aluminum. This is from the Politzer Collection, complete with hand written note of provenance by Frank Politzer. As documented on p.162 of Tuesday's Children. Measures 5" x 4 1/2" with a 3 3/4" chimney. Sold by Hartzell's Auction Gallery at the Balestri Auction on 7/12/18.