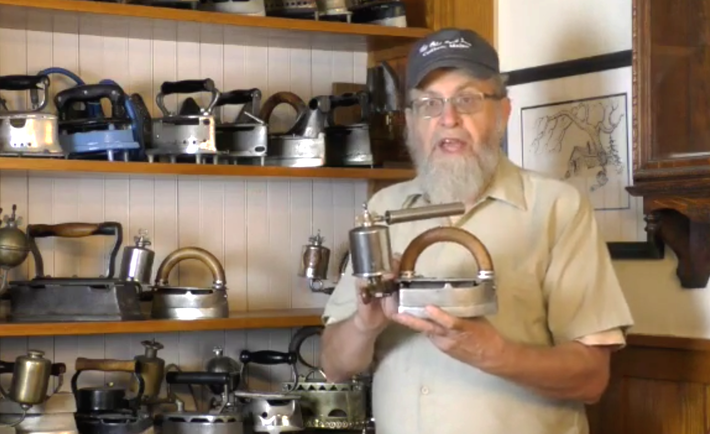 PITCA members Kevin and Kate McCartney live in Caribou, Maine. Together, they are producing a series of videos about iron collecting that can be found at Kevin Talks Irons on YouTube. (Links to each individual video are shared below.)

This series debuted on June 14, 2020 and feature Kevin talking about a wide variety of topics related to antique pressing irons, collecting, antiquing, and a few biographies of the more prominent iron inventors. It is intended to educate and entertain the avid collector, beginning collector, antique shop owner, pickers and novices alike. Each video is a mini lesson on a different topic about irons.

✽ If you'd like to be the first to know when a new video is released, make sure you Subscribe to their YouTube channel and don’t forget to give a Thumbs Up 👍 to each video!

The Five Most Recent Videos

#1 The Premiere An introduction to the fascinating world of antique pressing irons.

#14 Collecting Old Irons Kevin discusses his philosophy of collecting irons and the limits and focus of his own collection.

#16 Machine Fluters Used to crimp fabrics for the fancy clothing of that era.

#24 Patents for Old Irons A basic introduction to the role patents played in the development of old irons.

#29 To The Auction! A guide to buying irons from a specialty auction.

#32 Kerosene Stoves and the Sad Iron Heaters that love them A short tutorial on the history and variety of kerosene stoves.

#36 The Old Irons of Nelson R. Streeter was the inventor and marketer of the Sensible and Magic brands of irons.

#38 Top 10 Old Irons for the Beginning Collector The first 10 irons a beginning collector might search for.

#41 Mangles and other Wooden Devices for Pressing Fabric

#42 American Small and Toy Old Irons Learn the difference between a small iron, a toy, and a salesman's sample.

#43 Old Sad Irons as Advertising Learn how sad irons were used to promote goods and businesses.

#46 Live At The Auction You have a front row seat at the first Buck Carson Auction in 2021.