An Overview of Pressing Irons ✽ A brief primer on the history and variety of old irons by Kevin McCartney.

PITCA members Kevin & Kate McCartney own and manage The Old Iron Inn Bed & Breakfast in Caribou, Maine. Their collection of irons and trivets is on display throughout the Inn. They also produce the popular YouTube series Kevin Talks Irons. 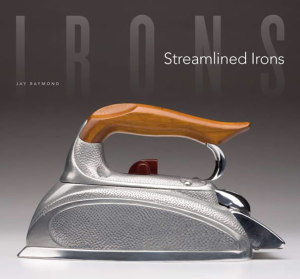 The collection began in the early 1980s with a small cache of irons found at a church rummage sale. Since then it has grown to number near 250, with 80 or more different manufacturers represented. When an iron is said to be early, late or otherwise described, this applies to the development of streamlined design as it is seen in irons. It does not necessarily apply to actual year(s) the iron was produced. Some manufacturers used the idea earlier than others and others abandoned it sooner. The development was not linear at every point.

This collection is nearly all from the USA, and what is said here is about irons from the U.S. Irons from other countries show that they each had their own appealing answers to what a streamlined iron looks like.

Henry Dreyfuss, the pioneering and respected US industrial designer, is said to have called streamlining cleanlining. One can see it by thinking of what can be done to minimize the wind resistance of an object. The leading edge is pointed and smoothed; all is curved and curved softly. Details are minimized. The object does not convey heaviness. It conveys lightness, speediness, simpleness, sleekness,  frugalness and the like. It is ironic that an Iron, a word conveying weight, should aspire to and appear non-weighty but it was as well suited to the idea as were train locomotives and graphics. (Later it would be learned that weight is virtually unnecessary for the chore of ironing wrinkled clothes: steam will enable fabric to straighten out almost by itself.)

The idea of streamlining and the materials, Bakelite, chromium plated steel and cast aluminum, were compatible. The materials could be used plastically, that is moldable, so that soft curves could be produced and very wide variations in designs could be achieved.

Early on, streamlined irons were smoother versions of early electrics: the bases were made with softer edges. See the Winpower for an early convert. Its handle is old style and the base is new style. The GE 149F84 successfully uses the new material Bakelite for its streamlined possibilities. Its base, though somewhat squared off, continues the line of the handle and so together a truly new (modern) look is seen. In fact, GE, called this iron The Moderne.

Later, the handles became a single piece extending to the cowl at front and rear. Most irons of this period were like this. Four first rate examples of this are the Erla F10, Montgomery Ward 24-DE-2669, General Mfg. Co and most famously, the Petipoint. At the end of the period the handle became completely integrated into the base: see the Westinghouse ID-72 as the prime example.

Then there are the irons that had a way unto themselves, and the Lady Dover 380 is one. Knapp- Monarch, who produced more variety in this field than any other manufacturer, used in this iron an unparalleled combination of multiple pieces of Bakelite, chrome bands, chrome leaves, color and texture. This, above a base used numerous times with completely different handles. See Knapp-Monarch's 470R and 19-504.

Some attempts were made to use wood, a material of the previous generation, as a 'plastic' material. The results were usually awkward and not as cleanlined. See the Selwyn Chief. A stunning exception to this is the Knapp-Monarch Steam King whose wood handle does not try beyond the wood's plasticity and achieves a wonderfully integrated and unique streamlined profile.

Just as streamlining was enabled by new technology, so was its demise. The development of a steam iron that boiled one drop of water at a time made the steam iron practical and very popular. Thus, the need to store water brought on larger and more squared off bases, which were now functioned as tanks.

And the word tank can be used to see what happened to the sleek beauties of the thirties and forties. One iron solved this problem and managed to be one of the crowning achievements in streamlining, General Mills' Tru Heat Iron. Designed like no other iron, it stands out today both for its appearance and its current population. No other iron has survived in the numbers it has.

General Mills also took a unique approach to the steam challenge and produced a streamlined attachment for the iron that had a stainless (then later, black plastic) tank attached at the rear, like an outboard motor, to hold the water. Proctor also thought to attach a tank to their fourth and last generation Never Lift Model 990. The profile of this iron already is more of the following generation, but the translucent blue tank is clearly of the now fading streamlined generation.

All in all, streamlining began about 1934 and was mostly over by 1950. About three of those years, during WWII, saw little domestic production. So there were about 14 years when the irons were arriving in this style. In that time, in the USA, a very large, diverse and mostly independent manufacturing base produced an amazing array of speedy, clean and shiny implements of household labor and yet the chore of ironing was still not loved. 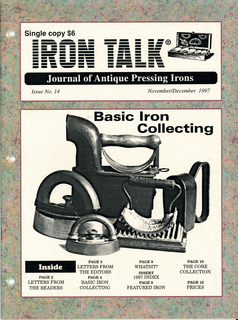 American country irons flourished from 1850 to 1950. The most common early irons were cast in one piece and weighed from five to seven pounds. In the nineteenth century, they were found in every country home and were heated on cast iron stoves. They are commonly called "flat" or "sad" irons. "Sad" is an archaic word meaning "dense" or "heavy".

Primitive irons are in a class by themselves, exuding an air of innocence. They were shaped by blacksmiths. They cost little when first made, but the best examples are marvelous finds for today's collector. An iron still revealing the mark of a hammer speaks the drama of its creation in every line. In country homes of the last century, people did their own work. Each person had a job. Ironing was part of the circle of life. Washing was on Monday. Tuesday was ironing day. While Mother did the family ironing, daughter was busy pressing dolls' clothes. Play was training for the child's adult responsibilities. Those toy irons are the focus of some of the most appealing collections. Little irons are four inches or less. Hundreds of different examples offer an opportunity for almost unlimited variety. They occupy a small space and are evocative of childhood innocence.

A collection of irons can be color-infused with ancillary washday items: soap packages, bluing bottles, starch boxes and various patent products. Clothes sprinkler bottles are another way to introduce a bright spot. The colorful bottles are found in a marvelous congregation of figural characters. They happily coexist with irons.

Antique irons of surprising beauty and diversity are still available at affordable prices. Places to look: flea markets, antique shows, dealers and garage sales. Wonderful finds are coming out of attics and basements. Sad irons may be the starting point of any collection, but learn the different types: charcoal, box, sleeve, polishers, fuel, fluters and others. After getting a core collection of common irons, acquire a hunger for rare and special irons. As an example, the Geneva rocking fluter patented in 1866 is usually an early acquisition. But, instead of being satisfied with the most common rocking fluter, add the more desirable Improved Geneva Fluter. Then look for other rocking fluters: The Star, The Lady Friend, Elgin, and The Erie with its detachable handle. Don't neglect the other types of fluters. The rolling fluter uses a roller instead of a rocker. Two common names are American Machine, Doty, Sundry and Shepard. The machine fluter accomplishes the same task with the turn of a crank. Collectors know the names of Knox, Osborne, American, Royal, Manville and Star.

The same in-depth spectrum can be realized with fuel irons, detachable handles, or any antique iron category. Look for the rare, different and the unusual. Even the basic sad iron has examples of fascinating attempts to keep the hand cool. Some handles were slotted for ventilation and air flow. Watch for spiral uprights, coiled handles, and folded uprights. These are rare and desirable. Combination irons, capable of doing more than one type of ironing job, reflect the nineteenth century's fascination with inventions and gadgets. They are found as sad/ fluters and charcoal /fluters. Watch for these hybrids. They are loved by collectors.

Gasoline and kerosene irons arrived early in this century and were welcomed because they were a vast improvement over earlier irons. Some Coleman irons, in particular, have beautiful colored porcelain bodies and matching grips. Early electric irons didn’t arrive in the country until rural electrification brought electric power outside the city. Sometimes salesmen would follow the newly-strung wires looking for customers. The oldest electric irons have porcelain connections and two-wire twisted cord.

Although lacking elegance and refinement, old-fashioned irons have a warmth of character making them collectible and lovable.

Jimmy and Carol Walker were long time members of MSICC and PITCA. They published the popular and authoritative periodical Iron Talk. It was their second career in iron collecting, one that came after years of being dealers in antique pressing irons. They were central figures in the international world of iron collecting. When they sold their collection at auction before the 2004 MSICC Annual Convention, it took three days to auction the 2400 lots and attendance hit an all time high of one hundred fifty people. Many collectors came from Europe to have a chance to own an iron with Walker provenance.

Carol Walker passed away in 2005 and Jimmy followed in 2017. They are greatly missed.