Having organized his life to allow ample time for friends, family and following his nose, Jay Raymond had the time to create his first book Streamlined Irons in 2008. His second book Mangle Boards of Northern Europe was published in 2015.

Jay's career has taken him from an art degree at Temple University to heating contractor, from building inspector to faculty member of the Barnes Foundation (Merion, PA), and from restaurant maître d' to handyman. He is also a poet and, in the past four years, a leader in the movement to preserve the integrity and intent of the Barnes Foundation's art and education.

Born in Philadelphia in 1954, Jay began collecting streamlined irons in the early 1980s. He now resides in Frenchtown, NJ. Jay served as PITCA President for 1999-2000 and is the current Editor of the PITCA Pressing News. 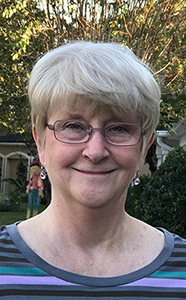 Until 1994, Lynn had been casually picking up trivets at flea markets and antique stores but didn't know much about them. That year her husband Ed gifted her the book Trivets & Stands (Kelly & Ellwood, 1990) and things haven't been the same since! Her expanding collection of trivets, at one time numbering over 1300, became the inspiration for two trivet books published by Collector Books: The A-Z Guide To Collecting Trivets (2004) and The Expanded A-Z Guide To Collecting Trivets (2010).

Lynn and her husband Ed joined PITCA in 2003 and live in Central Florida. Lynn has been PITCA Webmaster since 2013.